Hydrogen And It's Compounds Formulas

Solve your chemistry problems fastly and efficiently taking the help of Chemistry Formulas and learn about the Concepts without much effort.

(iii) By the electrolysis of water 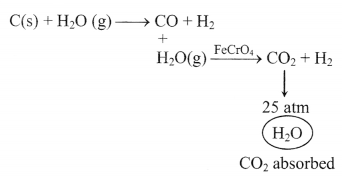 2. Properties of molecular hydrogen:
Metals like Pd, Pt, Ni, Co etc. adsorb large quantities of the gas due to vacancies between these atoms. This is known as “occlusion”.

This process is known as “hydrogenation” or “hardening of oils”

6. Water:
(i) The existence of hydrogen bonding is responsible for high values of specific heat, the latent of fusion and latent heat of vapourisation and high boiling point.
(ii) Some of the covalent compounds such as alcohols, carboxylic acids and carbohydrates are soluble in water due to formation of hydrogen bonding.

7. Hardness of Water:
• temporary hardness of water is due to bicarbonates of Ca and Mg. It can be removed by –

• Permanent hardness of water is due to chloride/sulphate of Ca and Mg. It can be removed by –

(c) Oxidising properties: It is a strong oxidising agent under acidic and alkaline conditions. Oxidation in acidic medium is generally slow while rapid in alkaline solution.
(i) In acidic solution:
H2O2 + 2H+ + 2e → 2 H2O

(d) Reducing properties:
It acts as a reducing agent towards strong oxidising agents in acidic as well as alkaline medium. Reducing action in acidic solution is slower than in alkaline solution. 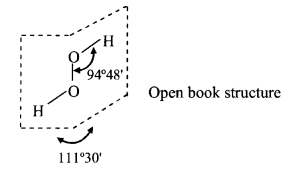 Structure of H2O2 in the gas phase.

11. Tests of H2O2:
(a) It liberates iodine from KI solution in the presence of ferrous sulphate.

Make the most out of the Hydrogen And It's Compounds Formulae provided at Onlinecalculator.guru and get your calculations or reactions simple & fast.